Published by Rosmel Caballero Fonseca on May 13, 2020 Genres: Action, Comedy, Demons, Fantasy, Martial Arts, School, Shounen
Yu Yu Hakusho , literally translated as " The report of the playful ghost " is a manga created by the mangaka Yoshihiro Togashi , beginning to be published since 1990 through Shonen Jump magazine  by Shueisha publishing house , with a total of 19 volumes, culminating the publication in 1994. The manga received the award for best shonen at the 1993 Shogakukan Awards . The anime adaptation began airing since October 10, 1992 on the television channel Fuji TV  and was in charge of Pierrot studio , under the direction of Noriyuki Abe, with 112 episodes, the last episode being aired on January 17, 1995. 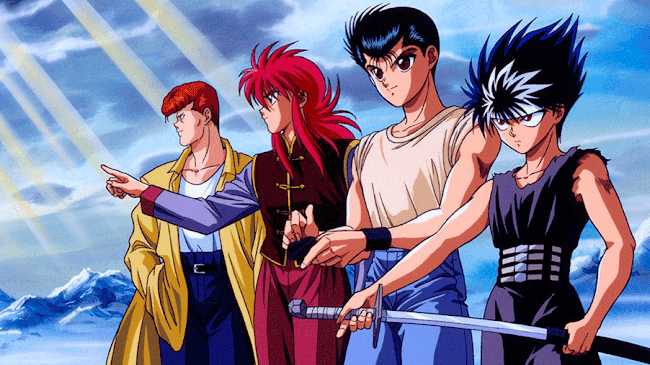 Yu Yu Hakusho tells the story of Yusuke Urameshi , a young man of disobedience and vehemently that for missing school. Suddenly, Yusuke dies hit by a vehicle while trying to help a child who was in danger.Then it is known that the child would survive anyway, and that the Spiritual World did not tell him that he died by a generous act. For this reason, he is granted the opportunity to be revived by Botan (a Shinigami who leads the dead from one world to another) . Yusuke meets Koenma, son of the ruler of the spiritual world Enma, who orders him a number of tasks to recover his body. Yusuke manages to return to the world of the living, thanks to his friends Keiko Yukimura and Kazuma Kuwabara. Koenma reveals that Yusuke is now a spiritual detective, and must use his unique gifts to fight against demons and other threats to safeguard the human world.


To make it easier for you to see  Yu Yu Hakusho without padding , it shows you the list with the chapters that you should avoid so you don't waste your time on meaningless chapters or just get bored with episodes of contributing nothing to the original story. This list of Yu Yu Hakusho chapters without filler is based on the comparison between manga and anime. Detailing the exact minutes you should avoid or see. If you like the genre of Fiction or Dark Fantasy surely you will like bleach, if you dare to see it here I leave you the bleach filling guide.