Published by Rosmel Caballero Fonseca on May 13, 2020 Genres: Action, Comedy, Fantasy, Game, Shounen
Yu-Gi-Oh! It is an anime adapted from the manga of the same name, created by the mangaka Kazuki Takahashi , which has been very popular, giving rise to several anime series, card games and many video games. The manga began to be published on 30 October 1996 the magazine Weekly Shonen Jump of Shueisha , the anime adaptation was by Toei Animation in 1998, which faithfully followed the story of the manga. Only 27 chapters were made that never left Japan, since it did not have a good reception by the audience. In 2000 a second anime adaptation was broadcast under the name of " Yu-Gi-Oh! Duel Monsters " by Studio Gallop and broadcast on the television networkTV Tokyo , this adaptation was accepted and culminated on September 29, 2004 with 224 episodes.

This anime had derived series like Yu-Gi-Oh! R, Yu-Gi-Oh! GX, Yu-Gi-Oh! 5D's, Yu-Gi-Oh! Zexal, Yu-Gi-Oh! ARC-V, Yu-Gi-Oh! VRAINS . And it is licensed by Netflix for Latinoanimerica The series focuses on " Yugi Moto 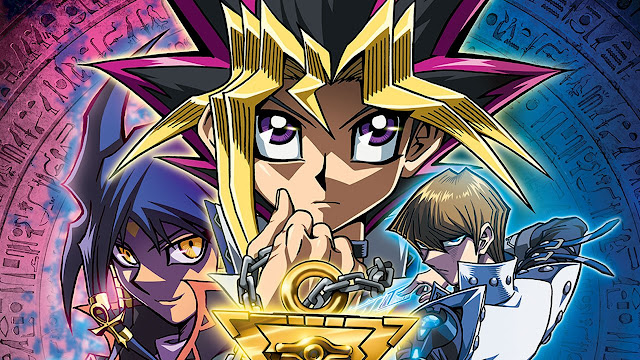 "A young high school student, had as an only comrade Anzu. Yugi had an ancient Egyptian device known as the Millennium Puzzle (one of the seven Millennial Objects) that his grandfather Sugoroku Moto gave him, he had found it in one of his archaeological excavations After 8 years, Yugi was about to solve such a difficult puzzle, but realizes that there was a small inscription on the device, the ass said "that whoever completed that puzzle could be granted a wish." Yugi wishes to have friends, but a few moments after placing the last piece, Jōnouchi and Hiroto steal the piece, Yūgi asks for it, but they refuse, and later they return the piece to Yūgi Once he had completed it he has as faithful friends to Jōnouchi and Hiroto.Immediately Yūgi is possessed by another personality, who later finds out that he is a spirit over five thousand years old, whom they know by the name ofYami . The story will continue, while Yūgi and his friends face several enemies, to try to get the letters of the Egyptian Gods, because through them you can return the lost memories of Pharaoh Atem (Yami's true identity) through the Monster Duels that are reflected in the Shadow Games (although this concept was not fully present in the original version).


Yu-Gi-Oh! It is a very popular anime, this you can confirm with numerous sequels and video games of the series, for this reason as usual in successful anime, they try to extend as much as you can by issuing Filler episodes and thus expand the series at the cost of lowering the Story quality So unfortunately many filler chapters were introduced. For this reason in this guide of yugioh episodes  you will be able to watch the series coherently, skipping the Filler and avoiding getting bored of the anime, in addition to being able to relive the battles, opening or ending that this series tells. And if you want to see a similar anime you will surely like "black clover", magic and action, if you cheer up here I leave you the black clover Filler list  .

FIRST SEASON: The Kingdom of Duelists


FIFTH SEASON: Grand KC Championship / The Memories of the Pharaoh