Published by Rosmel Caballero Fonseca on May 13, 2020 Genres: Drama, Mystery, Romance, Shoujo, Supernatural, Vampire
Vampire Knight , is a manga created by mangaka Matsuri Hino  and illustrated by  himself, beginning to be published from November  24, 2004  through LaLa and Daisuki  magazine  by the Hakusensha publishing house , with a total of 19 volumes, culminating its publication on May 24, 2013 . The anime adaptation began airing on April 7, 2008  on  TV Tokyo,  and was directed by Studio DEEN , under the direction of  Kiyoko Sayama , with 26 episodes:  Season 1 (12 episodes) and Season 2 (13 episodes) , ending its broadcast on December 29, 2008 .

This series was licensed by  VIZ Media (United States) and Manga Entertainment (United Kingdom) . Yuki's first memoryis of a stormy night in winter, where she was attacked by a rebellious vampire and rescued by Kaname Kuran , a pureblood vampire. Now, ten years later, Yuki Cross, the adoptive daughter of Cross Academy director Kaien Cross , has grown up and become a guardian of the vampire race, protecting her childhood crush, Kaname. 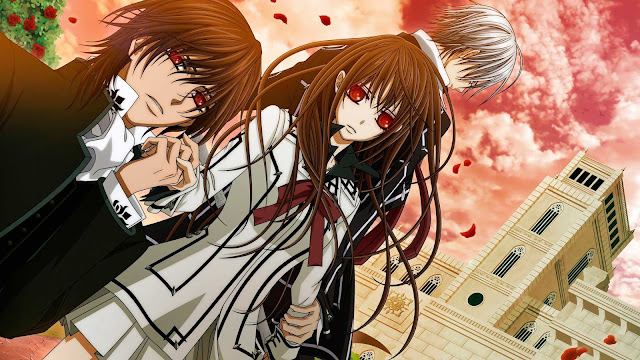 , from the discovery as he leads a group of vampires at the elite boarding school. At his side is Zero Kiryu , a childhood friend whose hatred for creatures that destroyed everything he held dear leaves him determined never to trust them. This coexisting deal sounds very good, but have vampires really given up their murderous ways, or is there a darker truth behind their actions? In this world of secrets, nothing is what it seems. The price of lost trust can be even worse than death.


To make it easier for you to watch Vampire Knight without filler , I show you the list with the chapters to avoid or skip, so you don't waste your time on pointless chapters or just get bored with filler episodes that add nothing to the original story. In this list of chapters of Vampire Knight without filling you will also be able to appreciate the chronological order (this so that you know the order that you must see the chapters, ova or movies) , likewise this guide is divided into sagas, arcs or seasons and each chapter with its respective name to make it easier for you to locate that episode you wanted to see again, whether you watch it on Netflix or Crunchyroll. And if this were not enough, if you just saw the anime in the final part of this article you can continue in the manga chapter that this one stayed.