Published by Rosmel Caballero Fonseca on May 13, 2020 Genres: Action, Comedy, Horror, Mystery, Police, Supernatural
Tokko , is a manga created by the mangaka Toru Fujisawa  and illustrated by  himself, beginning to be published since February 2004  through the Afternoon  magazine  by the Kodansha publisher , with a total of 3 volumes, culminating its publication in April 2004 . The anime adaptation began airing on April 15, 2006  on the  Fuji TV WOWOW network  and was in charge of the Group TAC studio , under the direction of Masashi Abe , with 13 episodes:  Season 1 (13 episodes) , ending its broadcast onJuly 29, 2006 . 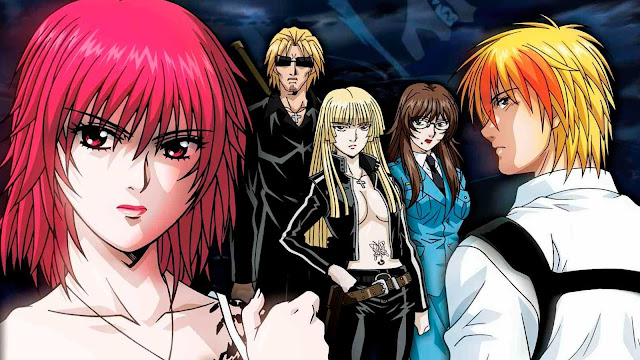 5 years earlier, after the massacre of his parents at his apartment complex, he was attacked and invaded by unknown assailants who brutally and brutally killed almost everyone in various buildings in the complex. He has been having recurring dreams for some time, of a tattooed girl covered in blood holding a giant sword surrounded by bodies, but now they are becoming more frequent. It is the day her class graduates to become investigators for the Mobile Investigation Special Forces, or Tokki, whom she joined to learn of her parents' deaths. Later on his graduation day, he sees the girl of his dream in a police uniform. She is Sakura Rokujo, who is in the same class as him and a member of Section 2, officially known as the Public Security Task Force, or Tokko. Its other main members include young prodigy Kureha Suzuka , silent strong man Takeru Inukai, and their leader Ryoko Ibuki . There are many rumors about Tokko, one of which is that they use swords to execute criminals and that body parts are often found in the crime scenes that Tokko investigates. There are also rumors that they are not even human.

Filler episodes to skip in tokko


For this reason the following tokko filler list will show you which episodes or chapters are filler in the tokko series, this means episodes that are exclusively from the anime and were not adapted based on the manga. With this list you can skip or avoid the tokko filler and thus skip the episodes that are filler or that you think you do not want to see. It should be noted that each episode if it contains any part of the original story of the manga will be detailed minutes to skip or view it, whether you see it by Netflix, Hulu, Funimation or Crunchyroll .