Published by Rosmel Caballero Fonseca on May 13, 2020 Genres: Action, Comedy, Mecha, Sci-Fi
Tengen Toppa Gurren-Lagann , (Also known as "Tengen Toppa Guren Ragan" or "Pierces the Sky Gurren Lagann") is a series created by  Hiroyuki Imaishi in the Gainax studio  ( also creator of Neon Genesis Evangelion ), the anime began to to be emitted from March 31, 2007 by the television network  TV Tokyo  and was in charge of the Gainax studio  , under the direction of Hiroyuki Imaishi , with 27 episodes + 2 movies, the last episode being aired on September 29, 2007. Two Compilation films were released between 2008 and 2009, the first integrating new animation scenes, and the second telling the true ending according to its creators. 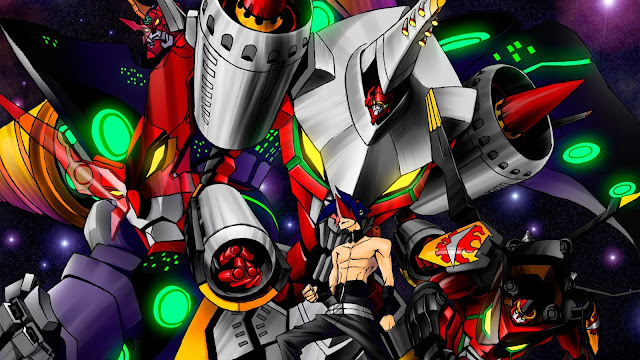 it takes place in a future where Earth is ruled by the King of the Spiral, Lordgenome, who forces humanity to live in isolated underground villages. These villages have no contact with the surface world or with other villages and are under constant threat of earthquakes. The selected villagers, called excavators, are recruited to expand their homes deeper underground. Simon, a young and humble digger isolated by his peers, finds solace in the figure of his best friend and older brother, an eccentric criminal named Kamina. Kamina encourages Simon to join his gang, Team Gurren, to help him achieve his dream of visiting the surface world. One day Simon discovers a key shaped like a drill called Core Drill, followed by a little mecha that looks like a face called Gunmen. Soon after, a large gunman crashes into the roof and begins to attack the village, followed by a girl named Yoko, who attempts to repel the gunmen. Simon uses his Core Drill to activate the smallest gunmen (which Kamina calls Lagann) and his puncture-based abilities, and successfully uses it to destroy the greatest gunmen and break the roof to bring him and Kamina into the world of the surface.


For this reason the following gurren lagann filler list will show you which episodes or chapters are filler in the gurren lagann series, this means episodes that are exclusively from the anime and were not adapted based on the manga. With this list you can skip or avoid the gurren lagann filler and thus skip the episodes that are filler or that you think you do not want to see. It should be noted that each episode if it contains any part of the original story of the manga will be detailed minutes to skip or view it, whether you see it by Netflix, Hulu, Funimation or Crunchyroll.