Published by Rosmel Caballero Fonseca on May 13, 2020 Genres: Action, Drama, Horror, Mystery, Psychological, Supernatural
Tokyo Ghoul is an anime adapted from the manga created by mangaka Sui Ishida , published by seinen Young Jump magazine, delivered weekly since September 2011, with a total of 14 volumes. The anime adaptation was in charge of Studio Pierrot and began airing on the Tokyo MX television network from July 5, 2014, with 12 episodes. The second season of the anime was titled " Tokyo Ghoul √A " (12 episodes), would tell an alternative story to the manga, and would not be an adaptation of the original story. A third season  Tokyo Ghoul: re (24 episodes, divided from 2 parts of 12 episodes ), It premiered in April 2018 covering the original story of the Tokyo Ghoul manga : re. 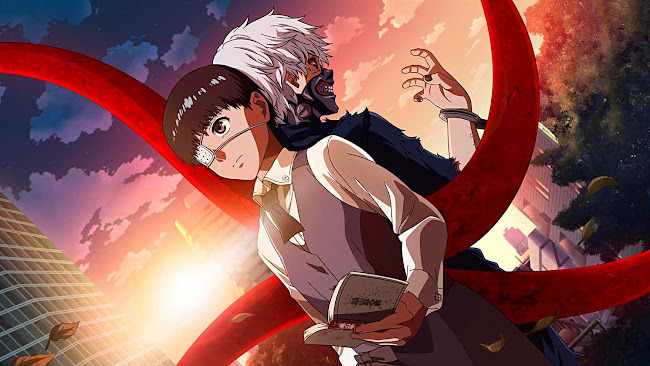 In the city of Tokyo, mysterious deaths occur because of Ghouls , who are beings that survive by eating human flesh. One morning Ken Kaneki , an 18-year-old boy meets a beautiful young woman whose name was Rize Kamishiro in a busy cafeteria and he invites her out. In the appointment everything concurred in the most normal way, Kaneki, decides to accompany her to the house to the young woman. But when passing through a dark alley, the young woman begins to attack Kaneki, because she was a Ghoul. During this incident, Kaneki is saved from dying because some beams fall on Rize killing her, but Kaneki is terribly injured. Due to the seriousness of the injuries, they decide to perform an organ transplant in the hospital, whose donor for the emergency is the attacking Ghoul (Rize Kamishiro). For this reason, Kaneki ends up becoming half human and half Ghoul, who from that moment must live hiding from humans.


Tokyo Ghoul  is an anime with no filler episodes , instead of adding episodes to lengthen the anime, they did the opposite by cutting the anime to a few episodes. The reason why the anime does not follow 100% of the manga is because of the strong story that it might not be suitable for all audiences, things like Death Hide that was different in the manga, in addition to the subsequent fight between Kaneki and Arima that It was not issued because it was very bloody. Below is an episode guide of Tokyo Ghoul, with which you can relive some moment of this anime, such as: a battle, the story of a character, in addition to being well organized by seasons and the opening or endings used in each chapter.

This season titled "Tokyo Ghoul √A" had variations in history compared to manga. But there are parts that do match the original story, so because of this you cannot say that it is 100% filled, but until the end it was changed. If you want to follow the original story you have to see the Tokyo Ghoul manga from chapter 67 to 143 which is final .


NOTE: If you decided to watch this season, surely you will not understand many things in the next season. Since in the anime many scenes of the manga were omitted, for reasons we don't know, the clearest example was the battle between Kaneki vs. Arima that was not broadcast in the anime, leaving those who only watched the anime confused, since they don't know the reason why Kaneki is working on the CCG in the Tokyo Ghoul season: re. If you want to see the original end of this season you should only see the Tokyo Ghoul mangachapter 136 that is located after the battle between Amon and Kaneki, in this chapter Kaneki flees through the sewers and meets his best friend Hide, which They changed in the anime. Then you have to see theChapter 137 , only page No. 16 (last), where Kaneki meets Arima. Finally you should see chapters 138, 139 and 140 (Battle between Arima vs. Kaneki). But if you want, you can see the following chapters so you can find out some extra things that did not appear in the manga, since this manga reaches 143.

* These eggs should be seen before the next season (Tokyo Ghoul: re)


NOTE:  The saga of Tokyo Ghoul: re was very summed up in the anime, leaving many scenes that happened in the manga, for this reason to find out how each of the characters finished you have to see the manga Tokyo Ghoul: re chapter 179 , which is final.