Published by Rosmel Caballero Fonseca on May 13, 2020 Genres: Ecchi, School, Shounen
Food Wars !: Shokugeki no Soma  is an anime adapted from the manga with the same name, it was written by Yuto Tsukuda and illustrated by Shun Saeki . An important contributor to the manga was Yuki Morisaki who provided the recipes for the story, the manga was published by Weekly Shōnen Jump since November 26, 2012 having 31 volumes by the Shueisha publishing house. The anime adaptation was in charge of the JC Staff studio  and was broadcast on television networks: MBS, TBS, CBC, BS-TBS, Animax, aired for the first time on April 3, 2015. The second season was released on the 2nd of July and the third was divided into 2 parts: the first was issued on October 3; and the second on April 8, 2018. 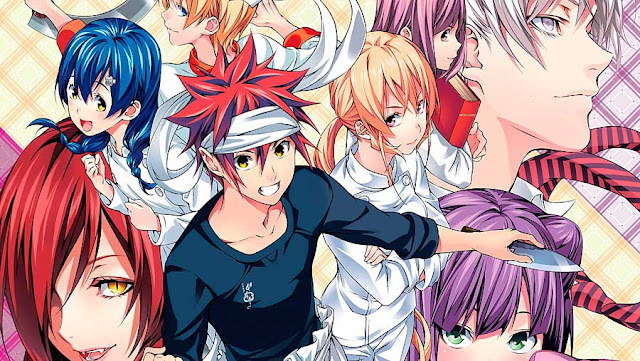 Soma Yukihira is a boy who longs to be a better cook than his father. One day, Soma's father arranges to close Yukihira, his father's restaurant and him, and go to Europe to work at the world's most prominent restaurants. For this reason, Soma's father proposes a challenge: to be the best student of the Tootsuki private school. Accessing the challenge of his father, he goes to Tootsuki, but upon arrival he learns that only 10% of students are qualified to graduate. Without having a crumb of fear, Soma throws himself into the shark-filled pool that is Tootsuki with his cooking skills as a weapon. Can Soma resist the toughest and best cooking academy in the world? .

Filler episodes to skip in Shokugeki no Soma

The following Shokugeki no Soma filler list will show you which episodes or chapters are filler in the series, this means episodes that are exclusively from the anime and were not adapted based on the manga. With this guide you will be able to skip or avoid Shokugeki no Soma filler episodes and thus enjoy this anime without filler. It should be noted that both the ovas, specials and movies (if the anime had these) will be located in chronological order, this for you to better enjoy on the Netflix, Hulu, Funimation or Crunchyroll platforms.

What is the order to see Shokugeki no Soma?


The correct timeline to watch Shokugeki no Soma  or Food Wars!  regarding their eggs and seasons is the following:
NOTE:
(*) The OVAS are optional since none were adapted from the manga, therefore they are not considered canon, they are extra material exclusive to the anime.