Published by Rosmel Caballero Fonseca on May 13, 2020 Genres: Action, Demons, Fantasy, Shounen, Supernatural
Ao no Exorcist (Blue Exorcist) is an anime adapted from the action and supernatural manga created by mangaka Kazue Kato . Published since April 4, 2009 by the Jump Square magazine of the Shueisha Publishing House , its adaptation to the anime was in charge of the studio A-1 Pictures in 2011 with Hitoshi Okamura as the producer, with 25 episodes, then a new installment film for December 2012. A second season came out after 6 years, premiering on January 6, 2017 under the title of " Ao no Exorcist: Kyoto Fujōō Hen"having 12 episodes, under the direction of Koichi Hatsumi, with Toshiya Ono as a writer, Keigo Sasaki as a character designer, and Hiroyuki Sawano and Kohta Yamamoto as composers. 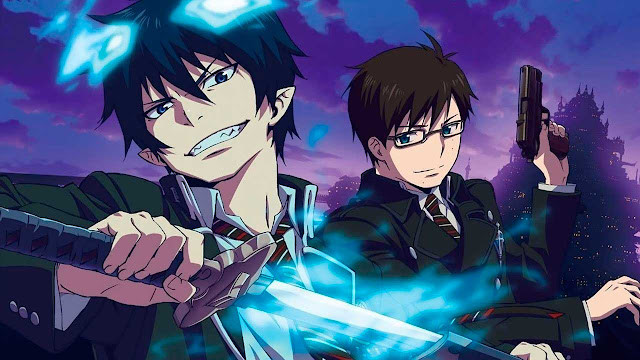 The series is based on Rin Okumura, a 15-year-old boy who, along with his twin brother, Yukio, was raised in a Church by Father Shiro Fujimoto, an exorcist. One morning, Rin learns that both he and his brother are sons of Satan and that he intends to take him with him to hell. After witnessing Shigo's death, Rin unsheathes Kurikara, a sword that contains her demonic powers accumulated inside her. From that moment on, Rin not only gets the demonic appearance, like fangs and a tail, but also has the power to sprout blue flames that eliminate anything he touches.

Rin takes the conviction of becoming an exorcist with the goal of being stronger and being able to protect his loved ones, and this will only be achieved by eliminating Satan. For this, Rin enrolls in the Vera Cruz Academy. which really is the Japanese branch of an international organization dedicated to safeguarding the queen of humans, Assiah, from the kingdom of demons, Gehenna.

Filler episodes to skip in Ao no Exorcist


The following Ao no Exorcist filler list will show you which episodes or chapters are filler in the series, this means episodes that are exclusively from the anime and were not adapted based on the manga. With this guide you will be able to skip or avoid Ao no Exorcist filler episodes and thus enjoy this anime without filler. It should be noted that both the ovas, specials and movies (if the anime had these) will be located in chronological order, this for you to better enjoy on the Netflix, Hulu, Funimation or Crunchyroll platforms. And if you finish the anime, I will mention in which chapter of the manga or where to start the manga after the anime, this to keep in mind, how far is the Ao no Exorcist manga

What chapter of the manga is Ao no Exorcist anime on?