Published by Rosmel Caballero Fonseca on May 13, 2020 Genres: Adventure, Comedy, Samurai, Shounen
Samurai Champloo , is an anime series produced by Manglobe studios. Composed with a development team made up of Shinichirō Watanabe (director), Kazuto Nakazawa (character design) and Mahiro Maeda (mechanical designer). The anime began broadcasting on May 20, 2004 by the Fuji TV television  channel  and on satellite television through the Animax channel not only in Japan but in different regions of the Asian continent, it was in charge of the Manglobe studio , under the direction of  Shinichirō Watanabe , counting on 26 episodes: Season 1 (26 episodes) , and being its last emission theMarch 19, 2005 . In Latin America, it premiered on September 18, 2006 on the Toonami block . 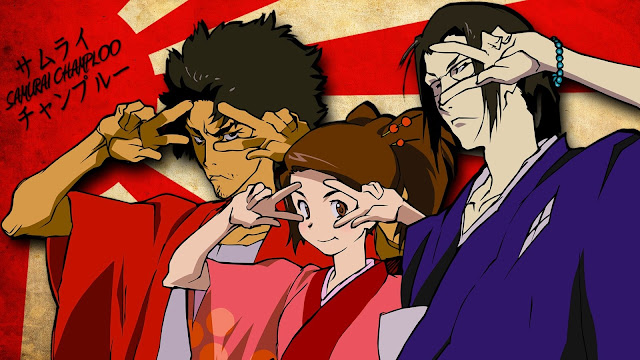 A young woman named Fuu is working as a waitress in a tea shop when a samurai gang abuses her. She is saved by a mysterious rogue named Mugen and a young rōnin named Jin. Mugen attacks Jin after he proves to be a worthy opponent. The two begin to quarrel with each other and inadvertently cause the death of Shibui Tomonoshina, the magistrate's son. For this crime, they will be executed. With Fuu's help, they are able to escape execution. In exchange, Fuu asks them to travel with her to find "the samurai that smells like sunflowers."


To make it easier for you to watch Samurai Champloo without filler , I show you the list with the chapters to avoid or skip, so you don't waste your time on pointless chapters or just get bored with filler episodes that don't add anything to the original story. In this list of Samurai Champloo chapters without filler you will also be able to appreciate the chronological order (this so that you know the order that you must see the chapters, ova or movies) , likewise this guide is divided into sagas, arcs or seasons and each chapter with its respective name to make it easier for you to locate that episode that you wanted to see again, whether you watch it on Netflix or Crunchyroll .