Published by Rosmel Caballero Fonseca on May 13, 2020 Genres: Adventure, Drama, Fantasy, Sci-Fi
Made in Abyss , is a Post Apocalyptic manga created by mangaka Akihito Tsukushi  and illustrated by  himself, beginning to be published since  October 2012  through the  Comic Gamma website  by the publisher Takeshobo , with a total of 7 volumes, currently still in publication. The anime adaptation began airing on July 7, 2017 on the AT-X television network  , Tokyo MX, TVA, SUN, KBS, TVQ, STS, BS11  and was in charge of the Kinema Citrus studio , under the direction of Masayuki Kojima , featuring 13 episodes: Season 1 (13 episodes), culminating the first season on September 29, 2017 . 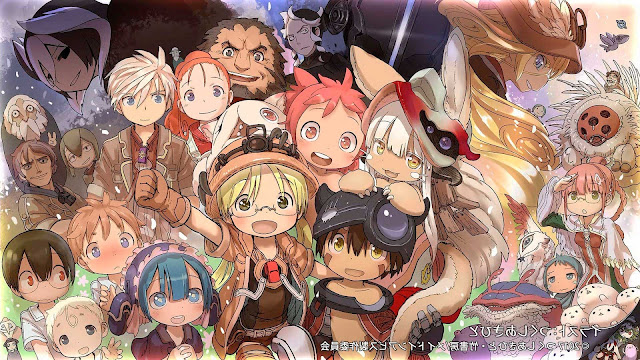 An orphan girl named Riko lives in the Belchero orphanage in the city of Orth. The city surrounds a strange giant hole that juts out into Earth, commonly called the Abyss. The Abyss houses artifacts and remnants of a past civilization, and is therefore the popular hunting ground for so-called Cave Raiders, who undertake arduous and dangerous descents into the mist-filled well to retrieve any relics they may find. . Returning from the Abyss can be dangerous since "the Curse of the Abyss", a mysterious and potentially fatal disease, manifests itself in ascension. The deeper one goes, the more acute are the effects of the curse; few who have descended to the lower regions have returned to share their experiences. Some legendary Cave Raiders win the White Whistle title,

Riko's desire in life is to follow in her mother's footsteps and become a White Whistle. One day, she discovers a robot that looks like a human child in the Abyss and calls it Reg. Riko and her friends hide Reg in Belchero and quickly welcome him into their tight-knit group. Sometime later, a balloon comes to the surface from the depths of the Abyss containing pages of discoveries made by Lyza, as well as a message to Riko that she is waiting at the bottom of the Abyss. Riko decided to find her mother, says goodbye to her friends and goes to the Abyss with Reg as her companion ...

Filler episodes to skip in Made in Abyss


The following Made in Abyss filler list will show you which episodes or chapters are filler in the series, this means episodes that are exclusively from the anime and were not adapted based on the manga. With this guide you will be able to skip or avoid Made in Abyss filler episodes and thus enjoy this anime without filler. It should be noted that both the ovas, specials and movies (if the anime had these) will be located in chronological order, this for you to better enjoy on the Netflix, Hulu, Funimation or Crunchyroll platforms. And if you finish the anime, I will mention in which chapter of the manga or where to start the manga after the anime, this to keep in mind, how far is the Made in Abyss manga

What chapter of the manga is Made in Abyss anime on?