Published by Rosmel Caballero Fonseca on May 13, 2020 Genres: Mystery, Police, Psychological, Supernatural, Thriller
Death Note , is a manga created by the mangaka  Tsugumi Oba  and illustrated by himself, starting to be published continuously since  December 2003  through the Shōnen Jump  magazine  by the publisher Shūeisha , with a total of 12 volumes + 1 special, culminating its publication in May 2006. The anime adaptation began airing on October 3, 2006 on  Nippon Television  and was in charge of the Madhouse studio , under the direction of Tetsurō Araki , with 37 episodes: Season 1 (37 episodes) , and being its last broadcast on June 26, 2007. 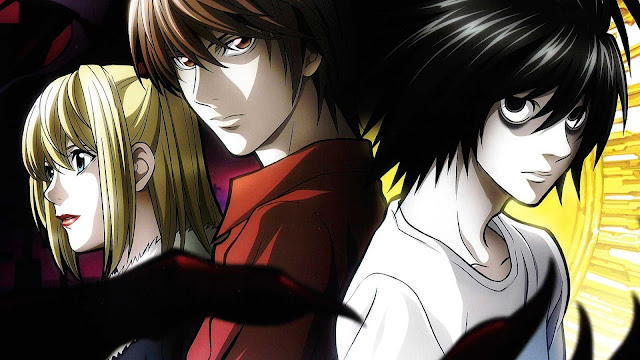 In Tokyo, a smart but discontented high school student named Light YagamiFind the "Death Note", a mysterious black notebook that can kill anyone, as long as the user knows the name and face of the target. After verifying that the notebook works and is at first terrified of her divine abilities, Light begins to consider the possibilities of the Death Note's abilities and sets out to create a utopian world without crime, killing numerous high-profile Japanese criminals, before finally attack. International criminals and criminals worldwide. Finally, Light is visited by Ryuk, a "Shinigami," beings inspired by the Japanese god of death and the previous owner of the Death Note, who dropped the notebook into the human world out of boredom. Ryuk, who is invisible to anyone who hasn't touched the Death Note,


To make it easier for you to watch Death Note unfilled , I show you the list with chapters to avoid or skip, so you don't waste your time on pointless chapters or just get bored with filled episodes that don't add anything to the original story. In this list of chapters of Death Note without filler you will also be able to appreciate the chronological order (this so that you know the order that you must see the chapters, ova or movies) , likewise this guide is divided into sagas, arcs or seasons and each chapter with its respective name to make it easier for you to locate that episode you wanted to see again, whether you watch it on Netflix or Crunchyroll. And if this were not enough, if you just saw the anime in the final part of this article you can continue in the manga chapter that this one stayed.