Published by Rosmel Caballero Fonseca on May 13, 2020 Genres: Drama, Mystery, Psychological, School, Shounen
Kakegurui , is a manga created by the mangaka  Homura Kawamoto  and illustrated by Toru Naomura , beginning to be published continuously since  March 22, 2014  through the Gangan Joker  magazine  by the publisher Square Enix , with a total of 11 volumes, it is currently in publication. The anime adaptation began airing on July 1, 2017 on the Tokyo MX television network  , MBS, BS11, RKB, TVA  and was in charge of the MAPPA studio , under the direction of Yuichiro Hayashi , with 24 episodes: Season 1 (12 episodes),  Season 2 (12 episodes) ,and its last issue was on March 27, 2019 . 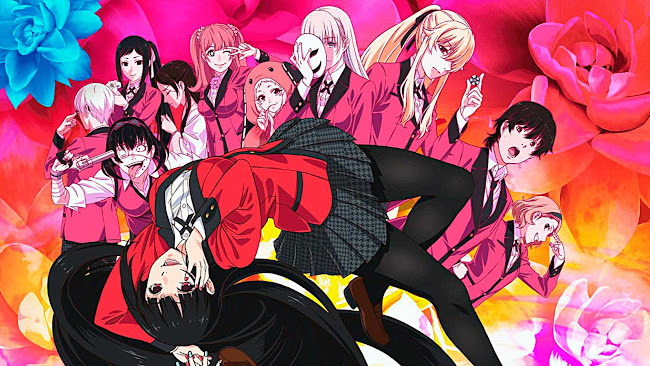 The story unfolds at Hyakkaou Private Academy, an elite high-class school that houses the children of the richest and most influential people in Japan and with many future leaders and professionals among the student body. However, the hierarchy of students at this school is not determined by academic performance or athletic ability, but by play. Students are ranked for their monetary contributions to the student council, fueling an intricate gaming system where students freely gamble their fortunes on each other after class. Those who win gain popularity, prestige and connections, while those who lose and go into debt become slaves of "domestic pets" at the whims of the rest of the student body, nicknamed "Doggy" or "

Filler episodes to skip in Kakegurui


The following kakegurui filler list will show you which episodes or chapters are filler in the series, this means episodes that are exclusively from the anime and were not adapted based on the manga. With this guide you will be able to skip or avoid kakegurui filler episodes and thus enjoy this anime without filler. It should be noted that both the ovas, specials and movies (if the anime had these) will be located in chronological order, this for you to better enjoy on the Netflix, Hulu, Funimation or Crunchyroll platforms.


In which chapter of the manga does Kakegurui continue?