Published by Rosmel Caballero Fonseca on May 13, 2020 Genres: Action, Shounen, Supernatural
Mirai Nikki , (In English is known as "Future Diary") is a manga created by the mangaka  Sakae Esuno,  beginning to be published from January  26, 2006  through the magazine Shōnen Ace  by the publisher Kadokawa Shoten , with a total of 12 volumes + 2 extras, culminating the publication on December 27, 2010 . The anime adaptation began airing on October 9, 2011 on  Chiba TV, Gifu Broadcasting, KBS Kyoto, Mie TV, Sun TV, Tokyo MX, TV Kanagawa, TV Saitama  and was in charge of the Asread studio , under the address of Nobutaka Nishizawa, with 26 episodes + 2 OVAS, the last episode being broadcast on April 16, 2012.

This series was licensed by  Madman Entertainment  (New Zealand, Australia) , Funimation  (Canada & United States) , Kaze UK / Anime on Demand ( United Kingdom), Crunchyroll  (Latin America) . Yukiteru Amano is a lonely and introverted sophomore, who spends all his time writing a journal on his cell phone from a viewer's point of view. His only friend is a product of his imagination, Deus Ex Machina , the God of Time and Space. One day, this god gives Yukiteru's diary 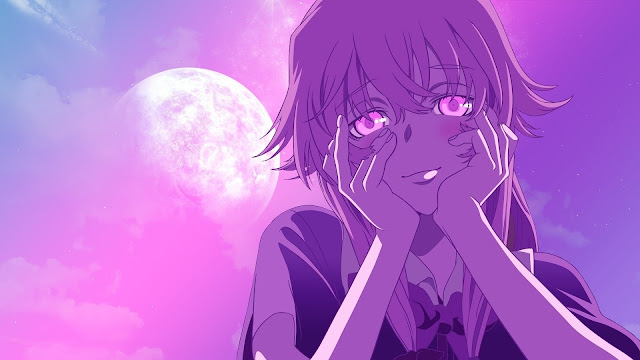 the ability to see what will happen in the next 90 days in the future and enlists Yukiteru in a deadly tournament where he must fight for his life against the owners of other similar newspapers.


To make it easier for you to watch  Mirai Nikki without filler , it shows you the list with the chapters to avoid so you don't waste your time on pointless chapters or just get bored with episodes of they don't add anything to the original story. This Mirai Nikki unfilled chapter list is based on the comparison between manga and anime. Detailing the exact minutes you should avoid or watch.