Published by Rosmel Caballero Fonseca on May 13, 2020 Genres: Action, Shounen, Sports
Captain Tsubasa , (known as Super Champions or Captain Tsubasa in Latin America) is a manga created by the mangaka  Yōichi Takahashi,  beginning to be published from April  13, 1981  through the magazine Shōnen Jump  by the publisher Shūeisha , with a total of 37 volumes, culminating publication on May 9, 1988 . The anime adaptation began broadcasting on October 10, 1983 on the TV Tokyo  television network  and was in charge of the Tsuchida Production studio , under the direction of Isamu Imakake, with 128 episodes (divided into 56 episodes in the first season and 72 in the second), the last episode being broadcast on April 16, 2012. 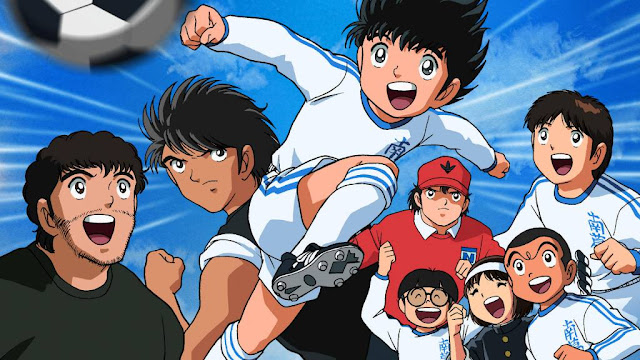 Tsubasa Oozora is an 11-year-old elementary student who is deeply in love with football and dreams of one day winning the FIFA World Cup for Japan. He lives alongside his mother in Japan, while his father is a sea captain who travels around the world. Tsubasa is known as Soccer no Moshigo, which translates to "heaven-sent soccer boy." When he was just a year old, he was almost hit by a bus that was running while playing with a ball. However, Tsubasa held the ball in front of him, which served as a shock absorber for most of the impact. The force of the blow knocked him down, but he was able to straighten with the ball. Therefore, Tsubasa's motto of "The ball is my friend". Ever since he was little, he always went out with a ball. His mother concludes that he was in fact born to play soccer alone. At a very young age, Tsubasa already had amazing speed, stamina, dripping skills, and shooting power; surprised anyone who saw him play.


To make it easier for you to watch  Captain Tsubasa without filler , it shows you the list with the chapters that you should avoid so that you don't waste your time on pointless chapters or simply get bored with episodes of they don't contribute anything to the original story. This caption list of Captain Tsubasa without filler is based on the comparison between manga and anime. Detailing the exact minutes you should avoid or watch.

Super Champions: Road to the World (Captain Tsubasa: Road to 2002)