Published by Rosmel Caballero Fonseca on May 13, 2020 Genres: Action, Comedy, Shounen, Sports
Eyeshield 21 , is a sports manga whose plot is American football created by the mangaka  Riichiro Inagaki and illustrated by Yusuke Murata,  beginning to be published since  2002  through the Shōnen Jump magazine  by the publisher Shūeisha , with a total of 37 volumes + 2 extras, culminating the publication in October 2009 . The anime adaptation began airing on April 6, 2005 on the TV Tokyo  television network  and was in charge of the Gallop studio , under the direction of Masayoshi Nishida, with 145 episodes (divided into 3 seasons) + 2 OVAS, the last episode being broadcast on March 19, 2008. 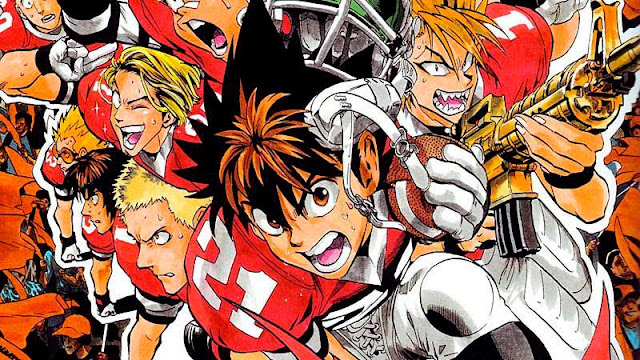 In Tokyo, a weak and non-assertive boy named Sena Kobayakawa you enter the high school of your choice: Deimon Private Senior High School. Sena's only notable physical abilities are her running speed and agility, which are noted by the school's football team captain, Yoichi Hiruma. Hiruma forces Sena to join the Deimon Devil Bats soccer team as his runner. To protect his identity from other teams who want to recruit him, Sena is forced to publicly assume the role of team secretary and enter the field under the pseudonym "Eyeshield 21" wearing a helmet with an eye shield. To hide his features. The makeshift team initially participates in the spring soccer tournament in hopes of winning with the force of its new "secret weapon." However,

Filler episodes to skip in Eyeshield 21


The following Eyeshield 21 filler list will show you which episodes or chapters are filler in the series, this means episodes that are exclusively from the anime and were not adapted based on the manga. With this guide you will be able to skip or avoid Eyeshield 21 filler episodes and thus enjoy this anime without filler. It should be noted that both the ovas, specials and movies (if the anime had these) will be located in chronological order, this for you to better enjoy on the Netflix, Hulu, Funimation or Crunchyroll platforms. And if you finish the anime, I will mention in which chapter of the manga or where to start the manga after the anime, this to keep in mind, how far is the Eyeshield 21 manga


In which chapter of the manga continues Eyeshield 21?

Anime episode
EYESHIELD 21
«The last anime episode of Eyeshield 21 to be aired is 145 which corresponds to chapter 240 of the manga with the name" Eyeshield 21 ".»
* CORRESPONDING TO SLEEVE N °: