Published by Rosmel Caballero Fonseca on May 13, 2020 Genres: Comedy, Drama, Romance, School, Shoujo, Slice of Life
Kare Kano , is an abbreviation of Kareshi Kanojo no Jijo , being a manga created by the mangaka Masami Tsuda  and illustrated by  himself, beginning to be published from June  10, 1996  through LaLa magazine  and Hana to Yume   by the Hakusensha publishing house , with a total of 21 volumes, culminating its publication on August 5, 2005 . The anime adaptation began airing on October 2, 1998  on the  TV Tokyo  television network and was in charge of the Gainax studio and JCStaff , under the direction ofHideaki Anno, Kazuya Tsurumaki , featuring 26 episodes: Season 1 (26 episodes) , ending its broadcast on March 23, 1999 . 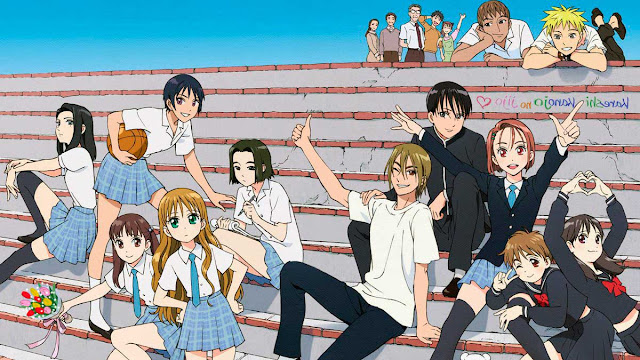 She is a Japanese freshman high school student who is the envy of her classmates for her good grades and impeccable appearance. However, its "perfect" exterior is a facade, an egocentric farce that it maintains to earn praise. In the privacy of her own home, she is spoiled, stubborn, a hobo, and studies relentlessly and obsessively to maintain her grades. Upon entering high school, Soichiro ArimaHe beats her from his position at the top of the class, a handsome young man whose existence, Yukino considers a threat to the praise he thrives on, and promises to destroy him. When Soichiro confesses that he is in love with her, Yukino rejects him and then brags about it at home. His observant little sister, Kano, points out that her rivalry with him stems from admiration, causing her to rethink her own feelings.


To make it easier for you to watch Kare Kano without filler , I show you the list with the chapters to avoid or skip, so you don't waste your time on pointless chapters or just get bored with filler episodes that don't add anything to the original story. In this list of chapters of Kare Kano without filler you will also be able to appreciate the chronological order (this so that you know the order that you must see the chapters, ova or movies) , likewise this guide is divided into sagas, arcs or seasons and each chapter with its respective name to make it easier for you to locate that episode you wanted to see again, whether you watch it on Netflix or Crunchyroll. And if this were not enough, if you just saw the anime in the final part of this article you can continue in the manga chapter that this one stayed.