Published by Rosmel Caballero Fonseca on May 13, 2020 Genres: Action, Drama, Martial Arts, Sci-Fi, Shounen
Hokuto no Ken (the English name is Fist of the North Star  and Spanish,  Fist of the Star of the North ), is an anime created by the mangaka  Buronson  and illustrated by Tetsuo Hara , beginning itself to be published since  the year  1983  through of the Weekly Shonen Jump magazine  by the publisher Shueisha , with a total of 27 volumes, culminating the publication in 1988 . The anime adaptation began airing on October 11, 1984  on the  Fuji TV network  and was in charge of the Toei Animation studio. , directed by Toyoo Ashida , with 152 episodes:  Hokuto no Ken (109 episodes),  Hokuto no Ken  2 (43 episodes ) , culminating part 2 on February 18, 1988 . 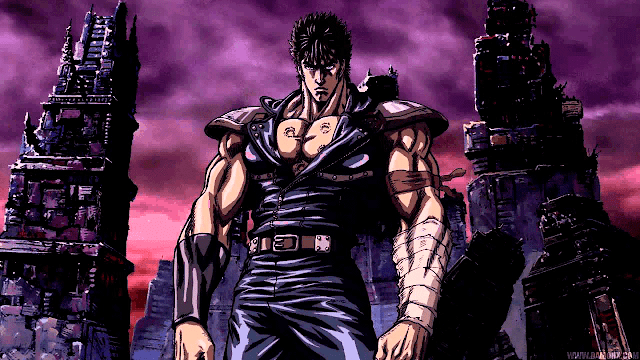 A world nuclear war sometime in the 1990s has resulted in the destruction of most of civilization, turning the world into a desert desert. The remnants of humanity fight for any food supply and uncontaminated water that still remains a strong prey for the weak. Kenshiro is the successor to Hokuto Shinken , an ancient art of murder that trains its practitioners to kill from within an opponent's body by using hidden meridian points. Kenshiro wishes to live his life in peace, but after being separated from his fiance YuriaFor a jealous rival, he begins his journey to become the savior of the post-apocalyptic world, defending the weak and innocent from the many gangs and organizations that threaten his survival. Along the way, Kenshiro meets a young thief named Bat and an orphan girl named Lin, who join him as his traveling companions and witness Ken's numerous battles.

See Hokuto no Ken without filler


To make it easier for you to watch Hokuto no Ken without filler , I show you the list with the chapters you should avoid or skip, so you don't waste your time on meaningless chapters or just get bored with filler episodes that don't contribute anything to the original story. . In this list of chapters of Hokuto no Ken Online without Filler you will also be able to appreciate the chronological order (this so that you know the order that you should see the chapters, ova or movies) , likewise this guide is divided into sagas, arcs or seasons and each chapter with its respective name to make it easier for you to locate that episode that you wanted to see again, whether you watch it on Netflix or Crunchyroll .


SEASON 2: The situation of the rivals


SEASON 3: The Conqueror of this troubled age