Published by Rosmel Caballero Fonseca on May 13, 2020 Genres: Action, Adventure, Drama, Fantasy, Magic, Military, Shounen
Fullmetal Alchemist: Brotherhood  (also known as "The Steel Alchemist"), is a manga created by and illustrated by the mangaka  Hiromu Arakawa  , beginning to be published since July  12, 2001  through the magazine Shōnen Gangan  in charge of the Square Enix publishing house , with a total of 27 volumes, culminating the publication on June 12, 2010 . The anime adaptation began to be broadcast from April 5, 2009 on the television network  JNN (MBS, TBS), Animax  and was in charge of the BONES studio , under the direction of Yasuhiro IrieWith 64 episodes, the last episode aired on July 4, 2010. 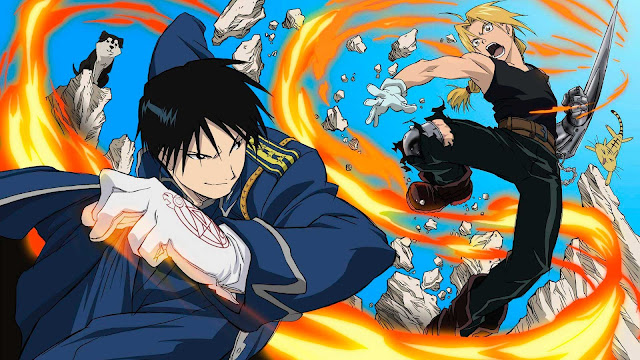 Fullmetal Alchemist: Brotherhood adapts the 27 volumes of the manga, unlike the first television series. Brothers Edward and Alphonse Elric are raised by their mother Trisha Elric in the remote village of Resembool in the country of Amestris. Her father Hohenheim, a remarkable and very talented alchemist, abandoned his family when the children were still young, and while in Trisha's care they began to show an affinity for alchemy. However, when Trisha died of a persistent illness, they were cared for by her best friend Winry Rockbell and her grandmother Pinako. The children traveled the world to advance their alchemical training with Izumi Curtis. Upon returning home, the two decide to try to revive their mother with alchemy. However, human transmutation is taboo, since it is impossible to do it correctly. In the resulting failed transmutation, Al's body is completely erased and Ed loses his left leg. In a last attempt to keep his brother alive, Ed sacrifices his right arm to retrieve Al's soul and stores it in nearby armor. After Edward receives the automail prostheses from Winry and Pinako, the brothers decide to burn down their childhood home (symbolizing their determination and decision not to "return") and head to the capital city to become government-authorized State Alchemists. . After passing the exam, Philosopher's Stone, under the direction of Colonel Roy Mustang. Along the way, they discover a deep government conspiracy to hide the true nature of the Philosophy Stone that involves the homunculi, the alchemists from the neighboring nation of Xing,


To make it easier for you to watch  Fullmetal Alchemist: Brotherhood without filler , it shows you the list with the chapters you should avoid so you don't waste your time on pointless chapters or just get bored with episodes of they don't contribute anything to the original story. This Fullmetal Alchemist: Brotherhood Unfilled chapter list is based on the comparison between manga and anime. Detailing the exact minutes you should avoid or watch.