Published by Rosmel Caballero Fonseca on May 13, 2020 Genres: Action, Adventure, Comedy, Fantasy, Kids, Shounen
Digimon Adventure  (Digimon: Digital Monsters or simply Digimon in Latin America), is an anime produced by TOEI ANIMATION . It is the initial series of the Digimon franchise, created by Akiyoshi Hongo (it is a pseudonym used by Bandai to refer to the group of people responsible for the creation of digimon). The anime adaptation began airing on March 7, 1999 on  Fuji TV (NoitaminA),  on Sundays at 9:00 am ,  under the direction of Hiroyuki Kakudo , with 54 episodes + 2 movies: Season 1 (54 episodes) , culminating the first season on March 26, 2000 . 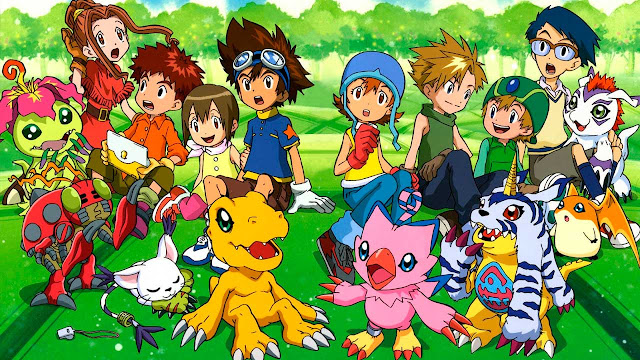 On August 1, 1999, seven children are transported to the Digital World by Digivices that appeared before them in the summer camp, where they become friends with various Digimon (Digital Monsters). Digivices for kids allow their fellow Digimon to digivolve in stronger ways and fight enemies. As children explore to find a way home, they learn that they are "DigiDestined", children selected to save the digital world.

After defeating Devimon, the DigiDestined are contacted by Gennai, who tells them to travel to the Server Continent to retrieve artifacts called Crests, which allows their Digimon partners to move from their current level to Digivolve. After defeating Etemon, the DigiDestined are tormented by Myotismon, who tries to prevent them from using the power of Crests. Myotismon searches for the eighth DigiDestined in the human world, who then learn to be Kari, Tai's sister. When Myotismon reveals his true form, Agumon and Gabumon achieve Mega forms through Warp Digivolution to defeat him.


To make it easier for you to watch Digimon Adventure without filler , I show you the list with the chapters to avoid or skip, so you don't waste your time on pointless chapters or just get bored with filler episodes that don't add anything to the original story. In this list of chapters of Digimon Adventure without filler you will also be able to appreciate the chronological order (this so that you know the order that you must see the chapters, ova or movies) , likewise this guide is divided into sagas, arcs or seasons and each chapter with its respective name to make it easier for you to locate that episode you wanted to see again, whether you watch it on Netflix or Crunchyroll. And if this were not enough, if you just saw the anime in the final part of this article you can continue in the manga chapter that this one stayed.