Published by Rosmel Caballero Fonseca on May 13, 2020 Genres: Action, Comedy, Sci-Fi
Trigun , is a manga created by the mangaka  Yasuhiro Nightowi  and illustrated by  himself, beginning to be published since  February 1995  through the Shōnen Captain  magazine  by the publisher Tokuma Shoten , with a total of 3 volumes, the magazine suspended its published in 1997 . The series continued under the name " Trigun Maximum " since 1998, published in Young King OURs magazine  by the publisher  Shonen Gahosha , with a total of 14 volumes and ending its publication in 2007. The anime adaptation began airing from April 4, 1998 by the TV Tokyo  television network  and was in charge of the Madhouse studio , under the direction of Satoshi Nishimura , with 26 episodes + 1 film: Season 1 (26 episodes) , culminating the first season on September 30, 1998 . 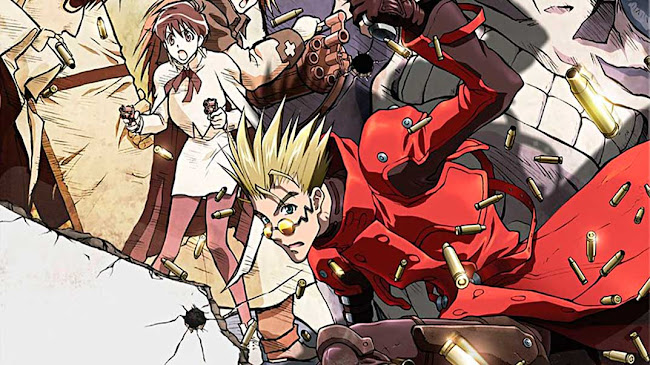 Trigun revolves around a man known as "Vash the Stampede" and two Bernardelli Insurance Society employees, Meryl Stryfe and Milly Thompson, who follow him to minimize the damage inevitably caused by his appearance. Most of the damage attributed to Vash is actually caused by bounty hunters looking for the $ 60 billion bounty on Vash's head for the destruction of the July city. However, he cannot recall the incident due to retrograde amnesia, as he was only able to recall fragments of the destroyed city and memories of his childhood. Throughout his travels, Vash attempts to save lives using non-lethal force. He is occasionally joined by a priest, Nicholas D. Wolfwood., Who, like Vash, is an excellent gunslinger with a mysterious past.

Filler episodes to skip in Trigun


The following Trigun filler list will show you which episodes or chapters are filler in the series, this means episodes that are exclusively from the anime and were not adapted based on the manga. With this guide you will be able to skip or avoid Trigun filler episodes and thus enjoy this anime without filler. It should be noted that both the ovas, specials and movies (if the anime had these) will be located in chronological order, this for you to better enjoy on the Netflix, Hulu, Funimation or Crunchyroll platforms. And if you finish the anime, I will mention in which chapter of the manga or where to start the manga after the anime, this to keep in mind, how far is the Trigun manga