Published by Rosmel Caballero Fonseca on May 13, 2020 Genres: Action, Horror, Sci-Fi
Deadman Wonderland , is a manga created by the mangaka Jinsei Kataoka  and illustrated by  Kazuma Kondou , beginning to be published from September  26, 2007  through the Shonen Ace  magazine  by the Kadokawa Shoten publisher , with a total of 13 volumes, culminating its publication on August 26, 2013 . The anime adaptation began airing on April 16, 2011  on  TVK, Gifu Broadcasting, BS Nippon Corporation, Chiba TV, Mie TV, Sun-TV, Tokyo MX, TV Saitama  and was in charge of the Manglobe studio , under the direction ofKoichi Hatsumi , featuring 12 episodes: Season 1 (12 episodes) + 1 OVA , ending its broadcast on July 2, 2011 . 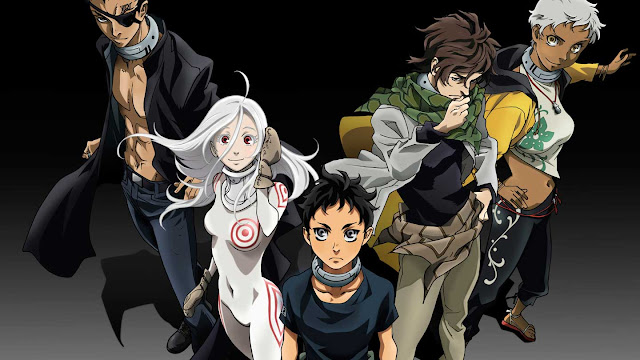 A massive anomaly caused a major earthquake that devastated the Japanese mainland and destroyed most of Tokyo, sinking three-quarters of the city in the Pacific Ocean. Ten years later, the story changes to Ganta Igarashi , an apparently ordinary student attending Nagano prefecture high school. As a fugitive, a survivor of the great earthquake, Ganta has no memories of the tragedy and has lived a normal life. All this changes when a strange person covered in blood and crimson armor floats through the windows of his classroom. Grinning madly, the " Red Man " massacred the entire Ganta class. Instead of killing him, the "Red Man" embeds a red crystal shard in Ganta's chest. Within days of the massacre, Ganta is brought to a kangaroo court as a suspect and sentenced to death in Deadman Wonderland , a prison that also functions as a theme park.


The following Deadman Wonderland filler list will show you which episodes or chapters are filler in the series, this means episodes that are exclusively from the anime and were not adapted based on the manga. With this guide you will be able to skip or avoid Deadman Wonderland filler episodes and thus enjoy this anime without filler. It should be noted that both the ovas, specials and movies (if the anime had these) will be located in chronological order, this for you to better enjoy on the Netflix, Hulu, Funimation or Crunchyroll platforms.

What chapter of the manga is Deadman Wonderland anime on?