Published by Rosmel Caballero Fonseca on May 13, 2020 Genres: Comedy, School, Shounen, Sports
Daiya no Ace , (In English it is known as " Ace no Diamond ") is a manga created by the mangaka  Yuji Terajima,  beginning to be published since 2006  through the Weelky Shōnen Magazine  by the Kodansha publishing house , with a total of 47 volumes, culminating the publication in 2015. The anime adaptation began to be broadcast from October 6, 2013 by the television network  TXN (TV Tokyo), AT-X  and was in charge of the Madhouse studio , Production IG , under the direction of Hiroyuki Tanaka, with 126 episodes (75 the first season and 51 the second), the last episode being broadcast on March 28, 2016. 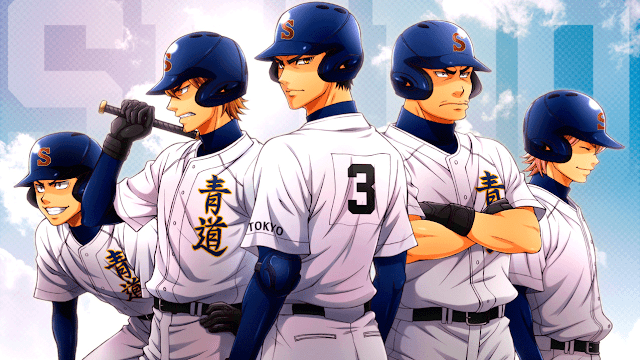 The anime centers on Eijun Sawamura, a baseball pitcher with a very unusual pitch change that has occurred naturally. Sawamura plans to go with his friends to a local high school and play baseball to the best of his ability. However, an explorer from the prestigious Seidou High School approaches him and offers him a scholarship and the opportunity to reach the Nationals. Sawamura decides to pay a visit to the school, and changes his entire perspective on the future. The first season follows Seidou and his main rivals as they try to help senior students reach the nationals during the summer tournament. After the summer tournament ends, students in the upper grades will be forced to withdraw, but to what extent can Sawamura help them when he currently has no control?

See Daiya no Ace without filler


To facilitate the task of watching  Daiya no Ace without filler , it shows you the list with the chapters that you should avoid so that you do not waste your time on meaningless chapters or simply get bored with episodes of they do not contribute anything to the original story. This list of unfilled Daiya no Ace chapters is based on the comparison between manga and anime. Detailing the exact minutes you should avoid or watch.