Published by Rosmel Caballero Fonseca on May 13, 2020 Genres: Comedy, Drama, School, Shounen, Slice of Life, Sports
Slam Dunk , is a manga created by Takehiko Inoue mangaka  ,  beginning to be published from October  1, 1990  through Shōnen Jump magazine  by the publisher Shūeisha , with a total of 31 volumes, culminating the publication on June 17 from 1996 . The anime adaptation began airing on October 16, 1993 on  TV Asahi  and was run by Toei Animation studio , under the direction of Nobutaka Nishizawa , with 101 episodes (52 the first season and 49 the second) , the last episode aired on March 23, 1996.

This series was licensed by Selecta Vision  (Spain) , Toei Animation  (Canada & United States) , Crunchyroll  (Latin America) . Hanamichi Sakuragi is a criminal and the leader of a gang. Sakuragi is very unpopular with girls, as she has been rejected fifty times by surprise. In her first year at Shohoku High School , she meets Haruko Akagi , the girl of his dreams, and is glad when she doesn't feel rejected or scared like all the other girls he's invited. Haruko , recognizing Sakuragi's athleticism , introduces him to the Shohoku basketball team . Sakuragi 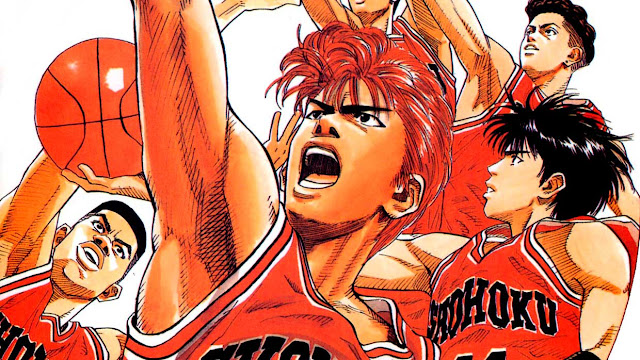 He is reluctant to join the team at first as he has no previous sports experience and thinks basketball is a game for losers because his fiftieth rejection was in favor of a basketball player. Sakuragi, despite her extreme immaturity and fierce character, proves to be a natural athlete and joins the team, mainly in hopes of impressing and getting closer to Haruko. Later, Sakuragi realizes that he has really come to love the sport, despite having previously played primarily due to his crush on Haruko. Kaede Rukawa - Sakuragi's bitter rival(both in basketball and because Haruko is in love, albeit on one side, with Rukawa), the rookie star and a "magnet girl" - joins the team at the same time. Not long after, the three-point shooter and former most valuable player in high school, and Ryota Miyagi , a brief but quick point guard, join the team and together fight to fulfill Team Captain Takenori Akagi's dream of winning the National Championship. Together, these misfits gain publicity, and the once little-known Shohoku basketball team becomes a stellar contender in Japan.


The following Slam Dunk filler list will show you which episodes or chapters are filler in the series, this means episodes that are exclusively from the anime and were not adapted based on the manga. With this guide you will be able to skip or avoid Slam Dunk filler episodes and thus enjoy this anime without filler. It should be noted that both the ovas, specials and movies (if the anime had these) will be located in chronological order, this for you to better enjoy on the Netflix, Hulu, Funimation or Crunchyroll platforms. And if you finish the anime, I will mention in which chapter of the manga or where to start the manga after the anime, this to keep in mind, how far is the Slam Dunk manga


What chapter of the manga is Slam Dunk anime on?