Published by Rosmel Caballero Fonseca on May 13, 2020 Genres: Action, Adventure, Fantasy, Shounen, Supernatural
Claymore , is a manga created by the mangaka  Norihiro Yagi,  beginning to be published from  May 2001  through the Gekkan Shōnen Jump, Shōnen Jump and Jump Square magazine  by the publisher Shūeisha , with a total of 27 volumes, culminating the publication on October 4, 2014. The anime adaptation began airing on April 3, 2007 on the NTV  television network  and was in charge of the Madhouse studio , under the direction of Hiroyuki Tanaka , with 26 episodes, the last episode being broadcast. on September 25, 2007. For its bloody content and nude scenes, it was censored in some countries. 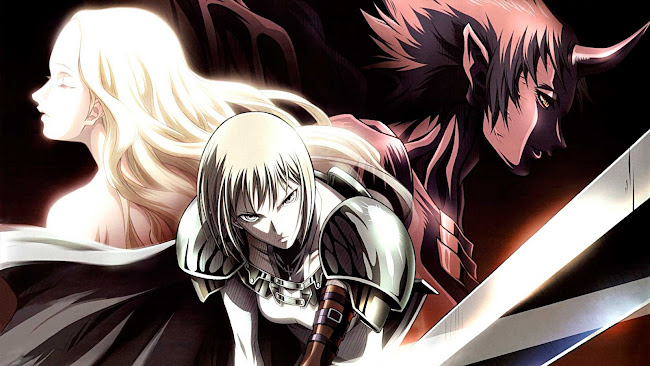 The series takes place on a fictional medieval island where humans are plagued by Yoma (妖魔), humanoid shape changers that feed on humans. A mysterious group, known as The Organization, creates human-Yoma hybrids to kill Yoma for a fee. These warriors wear armored uniforms. They are referred to by the public as "Claymores", alluding to their Claymore swords, or "Silver-eyed Witches" because of their silver eyes. Warriors Yoma and Claymore they are also powered by a demonic energy, Yoki, which allows them to change shape and extreme strength. When the warriors use too much Yoki, they "wake up", becoming a super-Yoma called an awakened being. The act of awakening is compared to the feeling of sexual climax, which is why in the meantime male and female warriors existed in the past, only women proved to be successful female warriors, and therefore the creation of Male Claymores stopped entirely .

The island world is divided into 47 districts, with a warrior assigned to each. The Claymore WarriorsNo. 1-47 are ranked according to their baseline Yoki potential, strength, agility, intelligence, detection, and leadership. A warrior's rank rises and falls according to the warrior's strength relative to other warriors. It is not clear if the strength of the warriors comes from training / experience or if the potential lies within the warriors themselves.

Filler episodes to skip in Claymore


The following Claymore filler list will show you which episodes or chapters are filler in the series, this means episodes that are exclusively from the anime and were not adapted based on the manga. With this guide you will be able to skip or avoid Claymore filler episodes and thus enjoy this anime without filler. It should be noted that both the ovas, specials and movies (if the anime had these) will be located in chronological order, this for you to better enjoy on the Netflix, Hulu, Funimation or Crunchyroll platforms. And if you finish the anime, I will mention in which chapter of the manga or where to start the manga after the anime, this to keep in mind, how far is the Claymore manga

What chapter of the manga is Claymore anime on?