Published by Rosmel Caballero Fonseca on May 13, 2020 Genres: Adventure, Comedy, Drama, Romance, School, Shoujo
Cardcaptor Sakura,  also known by the names of " Sakura, card hunter " or " Sakura Card Captors "  is a manga created by the CLAMP mangaka group , beginning to be published on May 1, 1996 through the Japanese monthly magazine of Shojo Nakayoshi manga  by Kodansh a, with a total of 12 volumes, was last published on June 1, 2000. The anime adaptation began airing since April 7, 1998 on the television channel NHK BS2  and was in charge of the Madhouse studio , under the direction of Morio Asaka, counting 92 episodes (70 episodes of the "Cardcaptor Sakura" version and 22 episodes of the "Cardcaptor Sakura: Clear Card-hen" season), the last episode being aired on June 9, 2018.

This series was licensed by Madman Entertainment (Australia) , NIS America (United States) and  Crunchyroll  (Latin America),  Selecta Visión (Spain) . The series narrates the voyages of Sakura Kinomoto , a small 10-year-old girl who accidentally releases a group of letters that were inside a book, which she had found in her father's library. After this, Kero 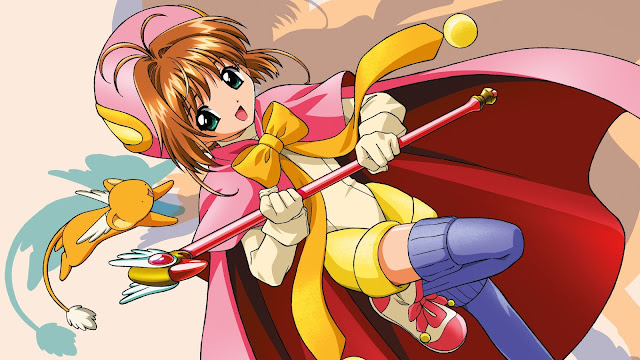 - the book's protector - appears and, upon learning that most of the letters known as the "Clow cards" had scattered everywhere, he tells Sakura that it is now his responsibility to become a "cardcaptor" and go on Search for them to avoid a tragedy in the world. Therefore, Sakura obtains special abilities to confront the magical powers of each card and to capture and seal them. Kero becomes the guide and mentor of Sakura during the search, while her best friend, Tomoyo Daidoji, composes great varieties of costumes, since she says she must wear special clothes for a special occasion . In addition, Tomoyo usually records some of Sakura's battles.


An anime of magic and fantasy, if you like this genre you will surely like Fairy Tail, which also contains fairy tail Filler . To make it easier for you to see  Cardcaptor Sakura without padding , it shows you the list with the chapters that you should avoid so you don't waste your time on meaningless chapters or just get bored with episodes of contributing nothing to the original story. This list of uncapped Cardcaptor Sakura chapters is based on the comparison between manga and anime. Detailing the exact minutes you should avoid or see, which are mainly special.