Published by Rosmel Caballero Fonseca on May 13, 2020 Genres: Mystery, Seinen, Supernatural
Bungou Stray Dogs  (could be literally translated as Literary Stray Dogs ), is a manga created by mangaka Kafka Asagiri and illustrated by Sango Harukawa , beginning to be published since  2002  through Young Ace  magazine  by Kadokawa Shōten publisher , with a total of 15 volumes, it is currently still in publication. The anime adaptation began broadcasting on April 7, 2016 by the Tokyo MX television network  , TVS, CTC, tvk, GBS, Mie TV, SUN, TVQ Kyushu and BS11  and was in charge of the Bones studio , under the direction of Takuya Igarashi, with 35 episodes: Season 1 (12 episodes),  Season 1  (12 episodes),  Season 3  (11 episodes). , currently being broadcast.

This series was licensed by  Selecta Vision  (Spain) , Anime Limited  (Canada & the United States) , Crunchyroll  (Latin America) . The story centers on the main character, Atsushi Nakajima . After being kicked out of his orphanage, Atsushi was found by the Armed Detective Agency , a detective agency whose employees possess supernatural abilities. Now he works together with the eccentric Osamu Dazai 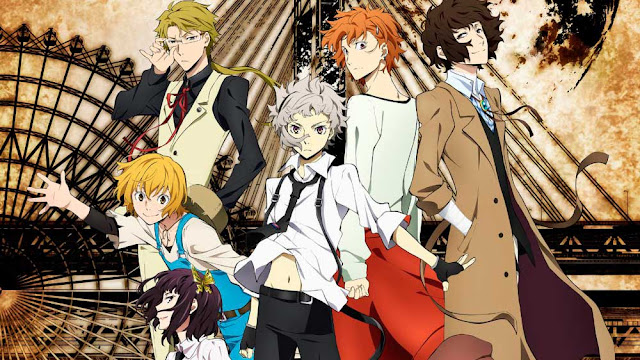 , and many others, while addressing various cases and events taking place in the city of Yokohama , a place full of people with Supernatural Abilities.


To make it easier for you to watch Bungou Stray Dogs without filler , I show you the list with the chapters to avoid or skip, so you don't waste your time on pointless chapters or just get bored with filler episodes that don't add anything to the original story . In this list of chapters of Bungou Stray Dogs without filler you will also be able to appreciate the chronological order (this so that you know the order that you must see the chapters, ova or movies) , likewise this guide is divided into sagas, arcs or seasons and each chapter with its respective name to make it easier for you to locate that episode you wanted to see again, whether you watch it on Netflix or Crunchyroll. And if this were not enough, if you just saw the anime in the final part of this article you can continue in the manga chapter that this one stayed.


In which chapter of the manga continues Bungou Stray Dogs?