Published by Rosmel Caballero Fonseca on May 13, 2020 Genres: Action, Comedy, Demons, Shounen, Supernatural
Beelzebub  (Beruzebabu), is a manga created by  and illustrated by the mangaka Ryūhei Tamura , it was first published as a single manga chapter in the Weekly Shonen Jump magazine of the year 2008 and later began to be published continuously since  23 February 2009  through Weekly Shonen Jump  magazine  by the publisher Shūeisha , with a total of 28 volumes, last published on March 13, 2015. The anime adaptation began airing on January 9, 2011 by  Yomiuri TV  and was in charge of the Studio Pierrot studio , under the direction of Nobuhiro Takamoto, with 60 episodes: Season 1 (60 episodes), and being its last broadcast on  March 25, 2012 . 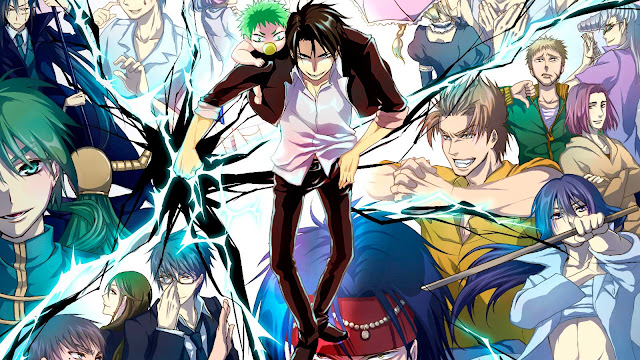 The story follows Tatsumi Oga . He is a freshman at a juvenile delinquent school called Ishiyama High. The story begins with Oga telling his best friend, Takayuki Furuichi, the strange story of how he found a baby. One day, while doing the laundry by the river, she saw a man floating down the river. Oga led him to shore but the man snapped in half, revealing a baby inside. This baby turned out to be the son of the great demon king, and Oga was chosen to raise him, along with the baby's maiden, Hilda. The manga follows Oga's life as she tries to raise the boy while enrolled at Ishiyama High.

In the first chapters, he tries to "pass" Beel on to other Ishiyama students, thinking that if he can find someone stronger and more wicked than him, the baby will bond with that person. He decides to try to pass the baby on to Touhoushinki, Ishiyama High's four strongest students. Oga meets and fights Hajime Kanzaki, the first member of Touhoushinki and the one closest to dominating the school; However, Oga defeats Kanzaki, making Beel find him even more attractive ...


To make it easier for you to watch Beelzebub without filler , I show you the list with chapters to avoid or skip, so you don't waste your time on pointless chapters or just get bored with filler episodes that don't add anything to the original story. In this list of Beelzebub chapters without filler you will also be able to appreciate the chronological order (this so that you know the order that you must see the chapters, ova or movies) , likewise this guide is divided into sagas, arcs or seasons and each chapter with its respective name to make it easier for you to locate that episode you wanted to see again, whether you watch it on Netflix or Crunchyroll. And if this were not enough, if you just saw the anime in the final part of this article you can continue in the manga chapter that this one stayed.

In which chapter of the manga does Beelzebub continue?

Anime episode
BEELZEBUB
"The last anime episode of Kimetsu no Yaiba that aired is the 60th which corresponds to chapter 122 of the manga with the name" Beelzebub "."
* CORRESPONDING TO SLEEVE N °: