Published by Rosmel Caballero Fonseca on May 13, 2020 Genres: Action, Horror, Seinen, Supernatural, Vampire
Hellsing , abbreviated as " FMP! " Is a manga created by the mangaka Kota Hirano,  beginning to be published since 1997 through Young King OURs Plus magazine  by the publisher Shōnen Gahōsha , with a total of 10 volumes, culminating the publication on September 30, 2008. The anime adaptation began to be broadcast on October 10, 2001 by the television network Fuji Television  and was in charge of the Gonzo studio , under the direction of Umanosuke Iida , with 13 episodes, being aired the last episode on January 16, 2002.

This series was licensed byMadman Entertainment (Australia) , FUNimation (Canada & United States) , Crunchyroll  (Latin America) , Selecta Vision  (Spain). Hellsing focuses on the Royal Order of Protestant Knights originally led by Abraham Van Helsing . Hellsing's mission is to search for and destroy the undead and other supernatural forces of evil that threaten the queen and the country. This organization is currently chaired by Sir Integra Fairbrook Wingates Hellsing 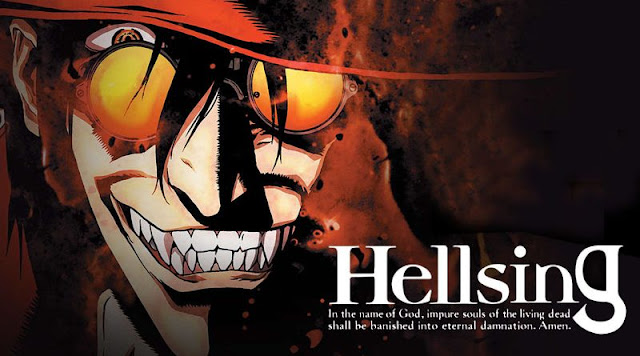 , who inherited Hellsing's leadership as a child after her father's death. She witnessed his death, which turned her from an innocent and shy girl to a hard and deadly force. She is protected by the faithful steward of the Hellsing family , Walter C. Dornez , a mortal enemy in her own right, and Alucard ., The original and most powerful vampire, who swore allegiance to the Hellsing family after being defeated by Van Helsing one hundred years before the story takes place. These formidable guardians were joined early in the story by former police officer Seras Victoria, whom Alucard turned into a vampire.

As the scale and frequency of incidents involving the undead increase in England and around the world, Sir Integra discovers that the remains of a Nazi group called Millennium still exist and are intended to revive Nazi Germany by creating a vampire battalion. Millennium, Hellsing, and Section XIII of Vatican Iscariot face off in an apocalyptic three-way war in London, and Millennium reveals its true goal: to destroy the vampire lord Alucard, ending a dispute that began during World War II.


To make it easier for you to watch  Hellsing without filler , it shows you the list of chapters you should avoid so you don't waste your time on pointless chapters or just get bored with episodes that add nothing to the original story. This list of unfilled Hellsing chapters is based on the comparison between manga and anime. Detailing the exact minutes you should avoid or watch.