Published by Rosmel Caballero Fonseca on May 13, 2020 Genres: Action, Shounen, Supernatural
Enen no Shouboutai , known to America as Fire Force , is a manga created by mangaka Atsushi Okubo  and illustrated by  himself, beginning to be published from September  23, 2015  through  Shonen Magazine  by Kodansha , with a total of 20 volumes, currently being broadcast. The anime adaptation began airing on July 5, 2019  on the television network  JNN (MBS, TBS)  and was in charge of the David Production studio , under the direction of Yuki Yase , with 48 episodes: Season 1 (24 episodes) ), Season 2 (24 episodes) ), ending its issue on December 27, 2020 . 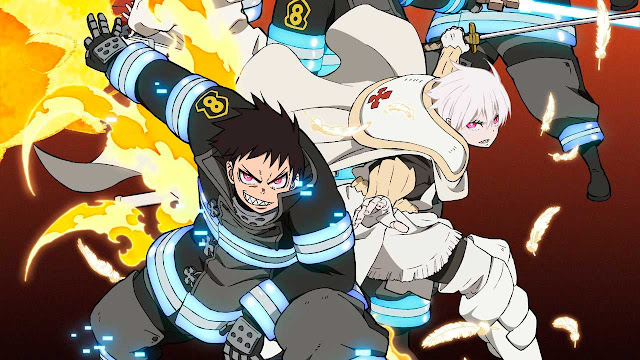 Shinra Kusakabe is a third generation young pyrokinetic who earned the nickname "Devil's Footprints" for his ability to light his feet at will. Joins Special Fire Force Company 8, which features other pyrokinetics that set about ending hellish attacks forever while investigating companies 1 to 7 for possible corruption in their ranks. Shinra begins to learn that the kidnapping of her younger brother during the fire that killed her mother 12 years ago is caused by a mysterious cult of the end of the world behind the infernal attacks. Company 8 and its allies oppose the White Cloaks and the Knights of Cinderella Flame, who are looking for certain individuals like Shinra and her brother to implement a plan to repeat the Great Disaster.


The following Fire Force filler list will show you which episodes or chapters are filler in the series, this means episodes that are exclusively from the anime and were not adapted based on the manga. With this guide you will be able to skip or avoid Fire Force filler episodes and thus enjoy this anime without filler. It should be noted that both the ovas, specials and movies (if the anime had these) will be located in chronological order, this for you to better enjoy on the Netflix, Hulu, Funimation or Crunchyroll platforms. And if you finish the anime, I will mention in which chapter of the manga or where to start the manga after the anime, this to keep in mind, how far is the Fire Force manga

What chapter of the manga is Fire Force anime on?