Published by Rosmel Caballero Fonseca on May 13, 2020 Genres: Adventure, Sci-Fi, Shounen
Dr. Stone , is a Post Apocalyptic manga created by mangaka Riichiro Inagaki  (another of his works was Eyeshield 21 ) and illustrated by Boichi , beginning to be published from  March 6, 2017  through Shonen Jump  magazine  by the Shueisha publishing house , with a total of 11 volumes, is currently still in publication. The anime adaptation began broadcasting on July 5, 2019 by the Tokyo MX  television network  and was in charge of the TMS Entertainment studio , under the direction of Shinya Iino , with 24 episodes: Season 1 (24 episodes), currently being broadcast. 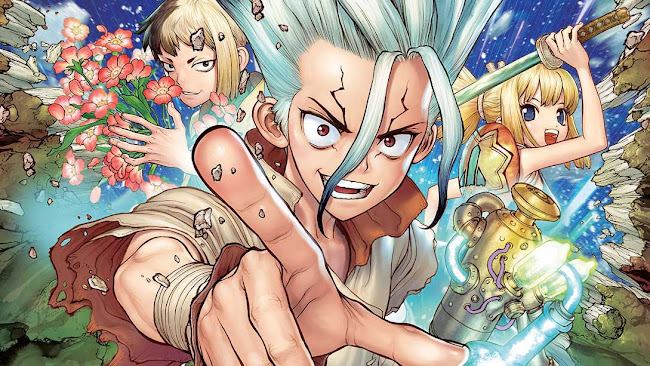 He tells his science-loving friend Senku that he's finally about to confess to Yuzuriha, whom he has been secretly in love with for five years. Finding himself under a camphor tree on the school grounds, just as Taiju is about to confess, a bright light appears in the sky. Taiju pushes Yuzuriha toward the tree to protect her, but the light suddenly petrifies. All humanity, with every human on Earth turning to stone. Most humans begin to lose consciousness as all traces of civilization decay, but Taiju lives on as the years go by with his motivation to free both himself and Yuzuriha. Finally, Taiju breaks free from the stone and finds a message engraved on the tree leading him to discover that Senku has also escaped from the stone, keeping his conscience alive by counting how long he has been petrified. Thus, Taiju learns that the date is now October 5, 5738 ...


The following dr. stone filler list will show you which episodes or chapters are filler in the series, this means episodes that are exclusively from the anime and were not adapted based on the manga. With this guide you will be able to skip or avoid dr. stone filler episodes and thus enjoy this anime without filler. It should be noted that both the ovas, specials and movies (if the anime had these) will be located in chronological order, this for you to better enjoy on the Netflix, Hulu, Funimation or Crunchyroll platforms. And if you finish the anime, I will mention in which chapter of the manga or where to start the manga after the anime, this to keep in mind, how far is the Dr. Stone manga

What chapter of the manga is Dr. Stone anime on?