Published by Rosmel Caballero Fonseca on November 28, 2019 Genres: Action, Adventure, Fantasy, Shounen, Supernatural
Nanatsu no Taizai (In English it is with the name of The Seven Deadly Sins and the Spanish The Seven Deadly Sins ) is an anime created by the Mangaka Nakaba Suzuki , published as a manga since October 10, 2012 by Weekly Shonen Magazine. Its adaptation to the anime was by the studio A-1 Picture , which began broadcasting from October 5, 2014 to March 29, 2015. After the end of the first season of the series, 2 eggs were released (June 27 of 2015 and August 12, 2015, respectively) and then a series with the name " Nanatsu no Taizai: Seisen no Shirush"It was aired to continue the series and as an advance to what would be the second season" Nanatsu no Taizai: Imashime no Fukkatsu "which premiered in January 2018.

This series was licensed by Funimation (United States) and Netflix ( Latin America) . 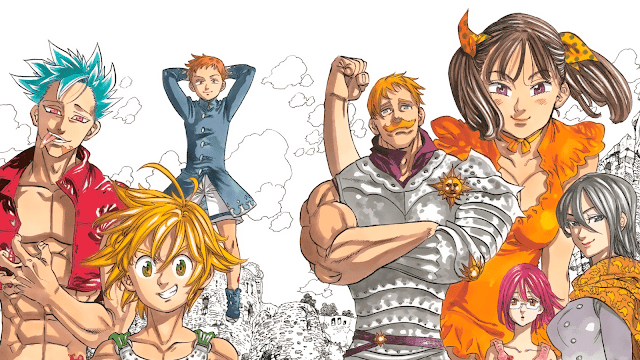 The third princess of the kingdom of Liones " Elizabeth Liones ", after a coup d'etat by the Holy Knights decides to escape and embark on a search in order to find some ancient knights called " The 7 deadly sins", which was composed of the worst criminals in the kingdom. One morning a mysterious knight in armor arrives at a local tavern, this makes people think that he is one of the Seven Sins , and all but the young owner of the tavern and his companion Hwak - a pig who can speak - flees in terror, but the one in the armor was Elizabeth herself who fainted with fatigue.The young owner of the tavern reveals that it is Meliodas , the Sin of Dragon's Wrath and the Captain of the Seven Deadly Sins. From that moment the three Deadly Sins decide to go looking for the other Sins.

Filler episodes to skip in Nanatsu no Taizai


For this reason the following the seven deadly sins filler list will show you which episodes or chapters are filler in the the seven deadly sins series, this means episodes that are exclusively from the anime and were not adapted based on the manga. With this ultimate guide you can skip or watch the the seven deadly sins filler and thus skip the episodes that are filler or that you think you do not want to see. It should be noted that each episode if it contains any part of the original story of the manga will be detailed minutes to skip or view it, whether you see it by Netflix, Hulu, Funimation or Crunchyroll .