Published by Rosmel Caballero Fonseca on October 28, 2019
Meliodas and the other deadly sins return to the small screen after the premiere of their second season of the anime. Seven Deadly Sins: Wrath of the Gods is the official name that will have the following saga and advances the worst for the less expected heroes of Liones.The last episode was “While you're here!” __ and premiered on June 30, 2018. Now, it seems that after just over half a year of hard work, Studio DEEN is ready to continue with a new season of anime. 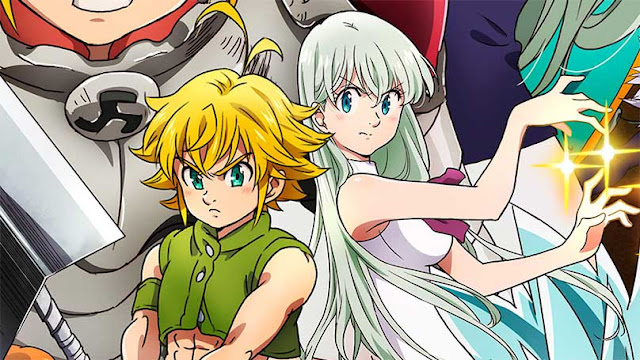 Through the official Twitter account, the anime confirmed its release date as well as new information on what will happen in the next episodes with Meliodas and the other capital sins on its way to redemption.

The continuation of the animation project based on Nakaba Suzuki's sensational manga is shrouded in mystery. Very little is known about the next episodes of the Seven Deadly Sins beyond the official name of their next season.


On the official Twitter of the anime, it has been published that it will be in this new batch that the show will reach a climax. In addition to their battle against the Ten Commandments, the fate of Meliodas and Elizabeth along with the secret of the world will finally be revealed.

Some fans believe, by the title of the new saga, that the Gods will finally appear in this great conflict between the Ten Commandments and the Seven Deadly Sins. What nobody is sure yet, is how powerful they will be, which side they will be or if they will seek peace or war.