Published by Rosmel Caballero Fonseca on October 28, 2019
Dr. Stone is the Shonen Jump manga that is becoming the most popular of the year in Japan. It is probably the first series in which science is the central issue and technology is the main solution to any problem without paying a dystopian tribute.

The world of tomorrow in the form of anime. The vindication of the new, to technology, to mad doctors, in short, to progress. 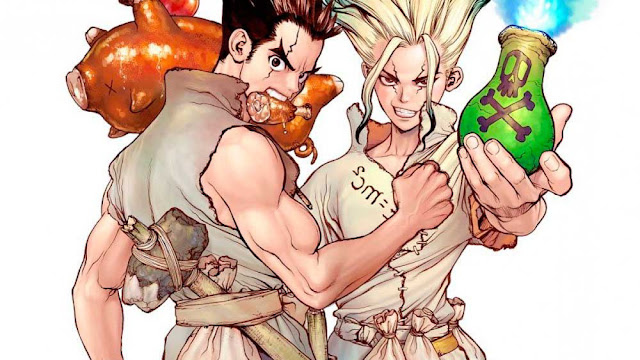 The country of science


Dr Stone is a manga written by Riichiro Inagaki (writer of Eyeshield 21) and illustrated by Boichi (author of Sun-Ken Rock) who has now just made his leap to anime. Here is the synopsis:

The day that Taiju Oki, a strong but somewhat palurdo teenager, finally decides to declare his love for Yuzuriha, something radical and unexpected happens: just a second before the declaration, unknown causes lead the total humanity to instantly become stone. After 3,689 years and 158 days, during which he has struggled not to lose consciousness and disappear, Taiju finally emerges from the stone and returns to normal. Although only to discover that the rest of humanity never woke up from his stony dream. Then he learns that his friend Senku, an absolute genius of much more pragmatic scientific vocation and mentality, has also survived. Now it is his obligation to rescue people and create a new world by fleeing superstition and magic and using the only really powerful tool: science.